The City is always known for its Traditional spicy & tasty food which is full of rich spices and herbs. The food here ranges from spicy to super spicy, which always braces the taste buds of tourists.

Aurangabad is renowned for its varieties of Biryani including both Vegetarian and non- vegetarian. The city is known to be the home of world class Mughalai Chicken Biryani. The other famous varieties include, Mutton biryani, Paneer biryani, and Veg Biryani.

A simple dish of Sheermal or the naan bread cooked in a tandoor served with khaliya, a spicy red mutton curry, which has been slow cooked all day. This dish is a complete meal in itself and as legend suggests, was used to feed the royal army. It is also known as the historic food of Aurangabad.

It is a combination of Indian spicy curry with pulao (Veg or non-veg). It is another special dish of the city. It is considered as the prime choice of the local people during the month of Ramzan.

Aurangabad is famous for it’s “Nan-khatai” sweet. These are eggless cookies purely made of flour, sugar and ghee. These Indian Biscuits are famously known from Mughal era. 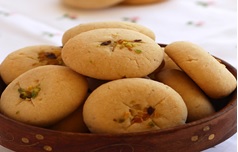